A math teacher came to us with the question: ‘Can you create a 30/60/90 degree version of a triangle tool for the TactiPad’? He wants his students to draw 3D shapes such as cubes, prisms and pyramids. Being interested to improve/extend the Thinkable products we have taken up this challenge.

After describing the details of the tool, we present some of the decisions we made during the design process. You will also find information on some of the aspects of the creation of ‘3D space’ using the TactiPad. 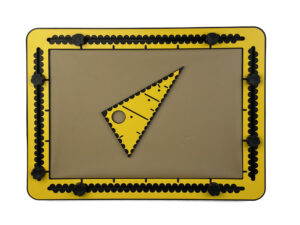 The first section the physical and tactile product details.

Section two describes our use of two different methods to decide on the units of measurement for the slanted side of the TactiPad triangle tool. The firsts of these methods includes a step-by-step description on how to draw a cube using the triangle tool and the TactiPad.

Section three deals with the creation of a coordinate system on the TactiPad drawing board and why an angle of 30 degrees for the X axis is most efficient for drawing 3D shapes as a tactile diagram.

Apart from the mathematical name of the shape, from now on, ‘triangle’ is referring to Thinkable’s TactiPad Triangle Tool as well. We will also use the name ‘369triangle’.

When the three corners of the triangle are set 30, 60 and 90 degrees respectively, it is known as a ‘1/2/sqr(3) triangle’. As a given, the three sides always have these proportional lengths. For practical reasons, the longest right side (sqr(3)) of the triangle tool is set to 15 centimeters (about 6 inches). The length for the other two sides can then be calculated as 15/sqr(3) multiplied by 0.5 or 1 respectively (8.66 and 17.3 centimeters).

The 30 degrees corner is pointing to the left when the surface with the tactile measurement indications is facing up and the 90 degree angle is at the bottom right.

Measurement indication along the three sides

For the two sides connecting at the 90 degree corner, the measurement indications are in centimeters. The size of the units used on the slanted side is arbitrary since, unfortunately, there is no standard for this. For the TactiPad triangle we decided on 20 units spread over 17.32 centimeters, which is rounded 0.87 centimeter per unit. With this regular pattern it is easy to count/measure from both the 30 and 60 degrees corners onwards.

Tactile properties of the triangle

The measurement indications at the top surface of the triangle are semi circles. At each measurement unit also a slight indent is provided. When combining touching the semi circles and counting the tick sounds that occur when tracing the pen along the sides with the indents, the speed of finding the correct position increases.

A hole of two centimeters can be found near the 90 degree corner. It can be used to place the triangle over one of the black knobs in the TactiPad frame.

Convention for the X, Y and Z axis setup

As we work in centimeters, the units for the Y and Z axis both have these distances corresponding with the measurement indication of the TactiPad.

The X axis is the slanted line that ‘comes out the paper’. The Y axis is drawn as a horizontal line. The Z axis is the vertical line. The Y and Z axis are under an angle of 90 degrees. In theory the angle between the X axis and the Y axis can range from – let’s say – 25 to 45 degrees. Where the three axes cross, is called origin (O). This is also the position to count units positive or negative from.

The size of the units used for the X axis is arbitrary, as this differs depending on different projections and there is no scientific consensus. For more information on the matter see Wikipedia. More importantly, the scale we use should serve as a good indication of tactile distance.

There are two variations of triangles with a 30, 60 and 90 degrees corner; one pointing left and the other pointing right. The one we selected for our triangle aligns with the coordinate system on the TactiPad.

Photo: The two variations of the triangle printed with 3D print technique

Photo: Cube with sides 6*6*6 centimeters drawn on the TactiPad

This projection has three pairs of similar surfaces: top and bottom, left and right, and the front and rear, with this last pair being visible as squares inside the projection.

The bottom surface has the corners A, B, C and D, with the A corner at the zero (0, 0, 0) position and the others going counter-clockwise from here.

We start from the zero position, and by moving 6 centimeters to the right along the Y axis to mark the position of the D vertex with the pen and a pushpin. The line from A to D is therefore the rear side of the bottom surface.

The front side of this same surface is in parallel to this, however in order to measure the exact distance between the two lines it is necessary to set up a measurement unit for the X axis.

As an experiment, and in order for the sides of this bottom surface to have a length of 6cm by virtue of the properties of the special right triangle (30/60/90 degree triangle), we draw a long support line 3 centimeters bellow the back line and parallelly to it. Using pushpins, we mark the intersection of this support line with the X axis as point B and a point 6 cm to the right as point C, with the segment between them becoming the front side of this surface.

By connecting point A with point B and point C with point D we fully trace the bottom surface.

At this point we are missing the 4 vertices that form the top surface, which are labeled from E to H, with the E point being 6 cm along the Z axis above the A point, and the other points once again being labeled counter-clockwise.

We mark point G by drawing a vertical line connecting point C with the X axis and marking the intersection. As the X axis serves us as a guideline we can do this easily with our triangle tool. We repeat the same process starting from point B to mark the final vertex (F). By connecting the points F and G, the front face is complete, and by connecting point E with point F and point G with point H the cube itself is completed.

Given the proportions of the sides of a special right triangle (30/60/90 degrees triangle) we know, that when the shortest right side is three centimeters, the slanted side has a length of six centimeters. This length is a result of the fixed proportions of the three sides and can be concluded from the photo below as well.

Photo: The 30/60/90 degrees triangle partly covered with the right side for a length of three centimeters. Along the slanted side another triangle is positioned to measure the distance from the 30 degrees angle to where the two triangles meet. The distance is six centimeters.

Considering this we evaluate whether this proportion results in sufficient tactile space and a cube with a good appearance. What do you think? In our opinion, the distance is just a little bit too big, and hence we would like to have a scale with units shorter than 1 cm for the X axis and the slanted side of the triangle, which we use to plot and measure it.

Units along the slanted side should measure less than one centimeter

So, when we conclude that the distance between the front and rear side of the bottom surface has to be shorter, the effect is the six units along the slanted side have to ‘shrink’. Imagine you move the right hand side triangle in the above photo to the left, thus towards the 30 degrees corner, this is clearly demonstrated.

Second approach: A practical number of units for the slanted side

Remember our starting point where we wanted to have a practical number for the amount of units. Grouping units per five would be helpful to be able to count fast starting at one of the two corners.

This would not be the case with any other number than 20 or 25. Dividing 17.32 by 20 gives us a distance of 0.87 centimeter between units. When multiplying this distance with six, we get the position for the B corner on the X axis of the cube. (6*0.87 equals 5.22 centimeters). Half of this is also the distance between the front and rear surfaces.

The calculation 17.3/25 * 6/2 gives the outcome 2.07 centimeters. This distance is to short; the front and rear surface are too close for a good tactile discrimination.

III. Aspects of the the creation of 3D space in detail

Two types of coordinate systems on the TactiPad drawing board

In order to draw a 3D shape you need a coordinate system first. There are two main approaches:

Methods to create the coordinate system

There are a few techniques to create the coordinate system with the Thinkable products:

Angle of the X axis in a 3D coordinate system

In a 3D coordinate system, the Y axis is usually drawn as a horizontal line and the Z axis as a vertical line, and hence, for both of these lines it is possible to use the lines of grid paper as guides. However there are many different approaches to drawing the remaining X axis. Mainly depending on the resulting aesthetic appearance of shapes plotted inside such a system and personal preferences:

Photo: The 30/60/90 degrees triangle tool with the 30 degrees angle pointing left. Along the two right sides centimeter indications. And along the longest side: a tactile indicator per unit less than one centimeter.

IV. Using the triangle in a (prepared) coordinate system

Once the coordinate system is prepared on the TactiPad, with or without measurement units along the axes, you can start adding coordinates and add lines.

With the interactive module ‘3D coordinate system’ you can create your 3D space. When including the measurement indications along the axes, they are in accordance with the triangle. Of course measurement units can be set/scaled to inches or other distances as well, given by any regular grid.

Finding distances on the axes or the triangle requires some exercising. Using push pins for marking positions is recommended. The triangle is easy to align with the axes or other existing lines in the drawing.