This is the first section

Note: Since summer 2022, the Digital Pen has not been for sale anymore. This manual is for users who still own this former Thinkable product.

The pen functions as a drawing tool and transmits to the computer what has been drawn, or as a cursor by transmitting on which location has been clicked. This way, the digital pen enables the user to make a digital version of a tactile diagram or to explore a tactile diagram with speech and sound. 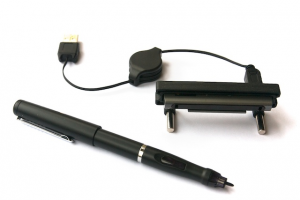