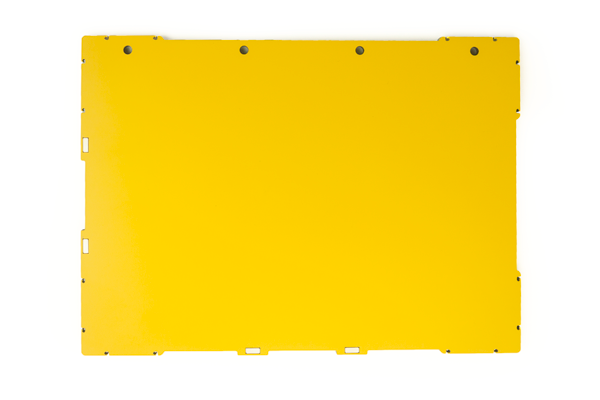 Magnets in the sides

Four magnets have been placed in the edges of the ClickPad. Two in one long side, two in one short side. Two magnets are also mounted in the holder for the receiver of the TactileView digital pen. This way, the holder will be attracted to the ClickPad.
Depending on the page orientation the holder is at the long side (landscape) or at the short side (portrait).
The holder can be detached and attached again. The magnets make sure that the holder automatically falls in the right position. The receiver for the TactileView digital pen can then be connected to the computer by a USB-cable.
The right-up marker on the tactile diagram can always be found in the upper right corner. Use this symbol on the diagram to determine the receiver’s position.

Paper clamps of the TactileView ClickPad

The digital pen is used to click on the tactile image to listen to any included audio-information, and to operate the TactileView software.
The pen has to be equipped with batteries. In the TactileView drawing software the pen can be tested and calibrated for the ClickPad. To prevent ink from being spilled on the image, it is advised to use the plastic tip included with the TactileView digital pen.

Exploring with speech and sound

With the tactile image placed on the ClickPad, the digital version of the design has to be opened as a file in the TactileView drawing software. The software then has to be switched from design mode to explore mode, using the digital pen (or the option in the View menu or hotkey Ctrl+E). Using the File menu, a design can also be opened in the explore mode straight away.
This mode also has a menu that can be operated with a long click of the digital pen (open context menu). From here a different file can be selected, matching a different printed tactile image.
By clicking on the tactile image, the audio-information is played. In case there is no audio-information on that location in the image, a ‘no-audio’ sound is played.

To be able to listen to the included audio-information, a Text to Speech system has to be installed on the computer. The TactileView software needs to have access to this system. Using the settings menu of the software, the language, speech rate and volume for the audio-information can be set.